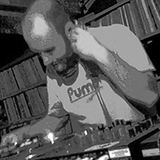 Long time music enthusiast Seth Nichols has been digging in music relentlessly throughout life. Music has always been a major player for him, with early electronic influences from Depeche Mode to Pink Floyd to KLF. As well as being a day-to-day owner/operator of Love Vinyl Records (lovevinylrecords.com) since 2001, it is safe to say Seth is living and breathing this music every day.

Behind the decks, Seth works to read and respond to the crowd in an uplifting fashion. Having played anywhere from 45 minute to 6 hour sets, Seth aims to work his blend and style into the set each time. Bringing a diverse sound that remains cohesive throughout, while riding on an energetic edge that pushes tuff and deep. A very percussive and organic sound is often heard along key melodic points positioned to spike the emotion. Musical flow is a big focus that Seth works to develop interestingly and progressively. Not always predictable, but not too far out. His passion is seen in the content and technical application he presents.