Norm A. and Norma Lones comprise Normal Ones: the Boulder-based, genre-elusive, “brain-lovechild” of Jahnavi Stenflo and Nathan Jantz. At its core, the Normal Ones are just two artists who have co-conspired on a lifetime journey of musical and sonic exploration inspired by their dominating attraction and love for each other. The boundaries are limitless, the love is endless and the affectionate bickering is a part of the process for this eccentric duo.

Active in the Denver and Boulder music scene for more than twenty years, Jantz, a former record shop owner, once supplied specialty electronic music records to some of Denver’s most well known DJs – a logical explanation for his exceptional record collection, which occupies the couple’s shared home. Stenflo, a self-described “tried and true punk rocker” at the age of fourteen and former Hare Kirshna, spent the majority of the 90s playing in a “death funk” band in Denver called Scroat Thrax. The two met while producing private house parties in 2001, but it wasn’t until  four years later that their musical collaboration would really take off.

“Even before we had any name, we were working on music together,” says Jantz. “Once we stated working together more and more, we actually were falling in love with each other. We made a lot of changes in our lives to be together and with that came producing music just between the two of us. We have kind of really lucked out in the sense that we are both are in love with each other and we can produce art together. It doesn’t always happen that way.”

Drawing on past influences and genres ranging from punk to acid house to industrial techno to jazz and world music, the sound of the Normal Ones is hard to pin down – but that’s kind of how they like it.

“We’ve never really settled so much into one kind of rhythm with any of our material. We have so much material that we cycle through maybe three or four times and then just try to come up with something completely new,” says Stenflo.

Pushing the boundaries and stretching their abilities has been a major driving point for Stenflo and Jantz. Part of what helps them to reimagine their sound time after time is their approach: song writing and structure as opposed to a more formulaic approach that the pair finds common in the techno genre.

“We have a wide array of moods that we work into our music, by no means would I consider us to be like techno,” Stenflo says. Jantz quickly added, “we draw on all influences…we will go from being super agro to being something melodic and beautiful. Whatever we do, we like to inject as much emotion as possible.”

Shifting gears yet again, the Normal Ones will be creating a fresh set for their showcase at eTown Hall as a part of the Saturday evening showcase alongside the Brooklyn-based synth guru Lichens. The performance is of particular resonance for the pair, as their history with Communiky runs deep. Both Stenflo and Jantz have been involved with the Festival since its inception in 2008, fulfilling major roles in production and lending a hand in curating the programming. 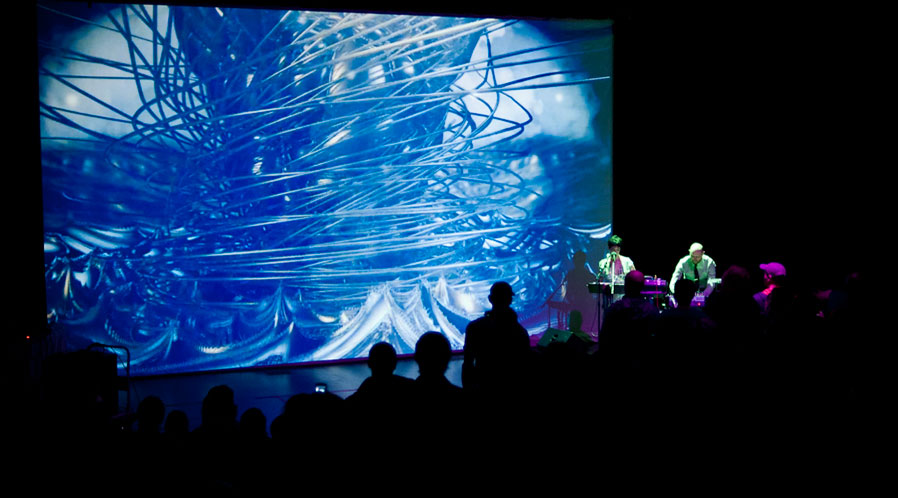 “We were at the first meeting that was ever held about having a festival,” says Stenflo. “The second year we were really involved in the moving and shaking of actually making the Festival happen.”

Neither knew that this year’s program would be the last when they accepted the invitation to play; and while the Normal Ones are happy to be on the bill, the news doesn’t come as a surprise – though the moment of realization was emotional.

“I think for both of us, we were kind of expecting it. It was a question that came up every year, even when we were more deeply involved,” says Jantz. “Eight years is a long time for something like this to run and peoples’ lives and their priorities change. It actually seemed appropriate to me.”

Stenflo adds, “my reaction at first was like yeah, OK, I can see that. But later that day I was at work and all of a sudden I was like, ‘it’s the last year of the festival!’ and I just started tearing up and, like, ‘oh my god, this is intense,’ you know?”

Expect to hear a very different, toned-down, contemplative and emotionally charged version of the Normal Ones at the last edition of the Communikey Festival on Saturday, April 18 at eTown Hall. Festival passes and showcase tickets are available for purchase via our Stranger Tickets page.