Communikey Festival 2014 begins next Thursday, April 10. If you haven’t already gotten up to speed with what we have in store this year, we’ve prepared this handy narrative to walk you through the program. Read on! 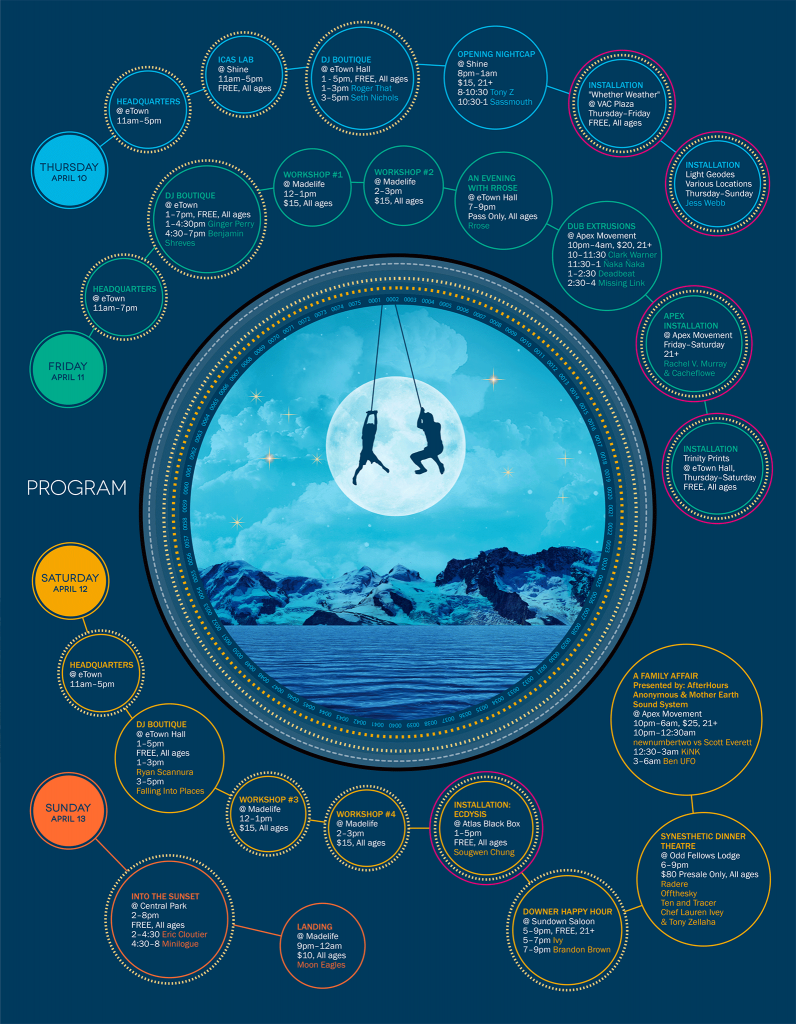 The festival kicks off with the ICAS Lab at Shine. Free and open to the public, this one-day symposium aims to facilitate an ongoing conversation between innovators who work in the intertwined worlds of culture, design and urban planning. That afternoon, our first DJ Boutique at eTown Hall — home to the CMKY 2014 Festival HQ — features Denver stalwarts Roger That and Seth Nichols, who have become local favorites thanks to their tireless gig schedules and deep record collections. Afterwards, the party moves back to Shine for our Opening Nightcap, where CMKY resident Tony Z and longtime midwest techno veteran Sassmouth will take to the controls and give Festival participants a proper welcome to Boulder.

On Friday, April 11, we start the day on a studious note with the first of our Dubspot workshops at madelife before firing up the p.a. at eTown Hall for our daily DJ Boutique. Ben Shreves and Ginger Perry will hold down the decks for this round, delivering an eclectic set of dancefloor wares reflective of their time spent on the Front Range techno circuit. Later in the afternoon, we will host our second Dubspot workshop at madelife before taking over the main room at eTown Hall for our passholder exclusive showcase featuring the acclaimed leftfield techno producer Rrose.

Please note: the Rrose event will be open to full Communikey Festival 2014 passholders only. Weekender passes do not include admission for this show, nor will there be individual tickets made available.

After a little breather, we will relocate to Apex Movement for Dub Extrusions: the first of two afterhours showcases to take place during CMKY 2014. Dub techno legend Deadbeat headlines, with support from the up-and-coming ambient techno producer Ñaka Ñaka and Denver’s own The Missing Link, who is preparing a special all-hardware live set for this event. Detroit icon Clark Warner, meanwhile, will warm things up with one of his classic DJ sets.

Moving into the weekend, Saturday kicks off with our third DJ Boutique at eTown Hall, featuring Ryan Scannura and Falling Into Places from Denver’s Deep Club crew, who are gaining notoriety for their house-inflected take on the techno aesthetic. Meanwhile, across town, Dubspot will help festival attendees get their learn on with two more workshops, focusing on deeper production techniques in Ableton Live. That afternoon, interdisciplinary artist Sougwen Chung will present her new Ecdysis Installation, which features an original score by Praveen Sharma from Sepalcure, at the ATLAS Institute Black Box Theatre. Afterwards, we set up shop at the Sundown Saloon for the Downer Happy Hour, where CMKY residents Ivy and Brandon Brown will set the controls for the heart of the weekend.

Saturday evening, we are pleased to also present our first ever Synesthetic Dinner Theatre at the Odd Fellows Lodge in downtown Boulder. Featuring a menu designed by Chef Lauren Ivey, who previously worked at the Abbott’s Cellar (CA), Poole’s Downtown Diner (NC) and Rioja (CO), the five course meal features musical accompaniment from Denver-based electronic musicians Ten And Tracer, offthesky and Radere. Each artist is currently developing a special performance piece inspired by their individual course. Additionally, they are set debut their collaborative ROTSTAT project as part of the event.

Please note: this event is not included in the Communikey Festival 2014 pass and is available only as an off-pass ticket. Only 48 seats are being made available for the dinner.

To round out our Saturday schedule, we move back to Apex Movement for A Family Affair, our second afterhours event, which is being hosted in conjunction with AfterHours Anonymous and Mother Earth Sound System. Hessle Audio boss Ben UFO — who has become one of the most hotly tipped selectors in the game — and Bulgarian techno auteur KiNK are set to headline, with Denver techno vets newnumbertwo and Scott Everett providing support with a special b2b set.

After a short respite, we take over Boulder Central Park for Into The Sunset, our crowd favorite park party. This year, we present renowned live techno act Minilogue. It will no doubt be a bittersweet moment, but we are honored to host one of their last ever North American shows. New York’s Eric Cloutier — one of the Bunker’s resident DJs — is set to provide support. His sets are always a treat, so be sure to arrive and early and stay late!

Once things wrap up at the park, we’ll take things back over to madelife for our Landing party, where Make Mistakes residents steofan and Time For Trees will present their mysterious Moon Eagles project. These guys are longtime cohorts of CMKY, so expect some deep familial vibes as they take Communikey Festival 2014 home.

For a full rundown of the CMKY 2014 Festival schedule, visit our website. There, you will be able to purchase Festival passes and individual showcase tickets, as well as get details on the installations we will be featuring around Boulder throughout the festival.