CMKY: So what is Mondo Robot?

CH: That’s a really good question…so, what is Mondo Robot? So at our core we’re a creative digital agency this is driven by passion and creativity first and foremost. Our primary goal is to create innovative solutions within the digital space for our clients. To elevate their brands and tell their story through kick ass digital experiences.

CMKY: Cool. Who are your clients, or what are the projects you’re working on?

CH: We have a pretty wide range of clients, from tech companies like Microsoft, Digital Globe and Comcast, to entertainment properties like Fathom Events and Warner Brothers, to some smaller local companies like Spot Brand bikes and the Reel Rock Film Festival. We also do some digital work for non-profits, like the Michael J. Fox Foundation for Parkinson’s disease and ATHN, the American Thrombosis & Hermostasis Network for patience with hemophilia.

Currently we’re working on a bunch of cool projects for our clients that include a couple of mobile apps, a 3D animated video and few Web sites.

On top of our paying gigs we try and squeeze in as many projects for ourselves as well, like the projects we do for CMKY and other personal endeavors. We’re always trying to keep shit fun and interesting.

CMKY: What’s the coolest project you guys have worked on, or like where you had the most fun, or was the juiciest?

CH: That’s a tough question, because we’ve done a ton of projects that have been really challenging and have been a lot of fun to work on.

One that stands out the most is probably an iPad game we did for Zach Schneider’s movie Sucker Punch, for Warner Brothers Studios. It was our first 3D immersive game, our first iPad app… and we had to crank it all out in just 8 weeks. What made it even cooler is that they gave us a ton of creative freedom to do what we wanted. These types of intense conditions are where we do our best work; ones that force us to figure shit out and create stuff under intense pressure.

We also did a couple of projects for NASA that were really fun. One really cool project utilized crowd sourcing to help NASA identify craters on Mars. Users were rewarded with badges and reputation points for finding craters from images taken from massive amounts of satellite imagery.

We also created a touchscreen gaming experience for NASA that taught kids about the different tradeoffs that needed to be taken into account when planning a trip to Mars. Kids had to pick different criteria, like what kind of rocket boosters they needed, how much fuel was required, and then based on all this mathematical criteria the app would determine if they could make it to Mars based on how much weight , fuel and propulsion was required. 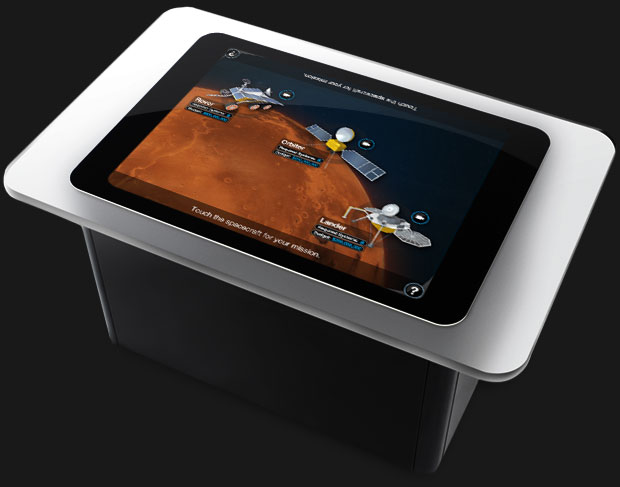 CMKY: That is awesome.

CH: Yeah we love doing the more creative and innovative projects, I mean the project we worked on last year with CMKY in doing The Rainbow Sandwich Projectile Experience was a lot of fun, it was our first attempt at doing a project utilizing projection mapping. Those types of projects are a blast because we have complete freedom and plus its a complete creative expression of all the things we learn on a day to day basis but get to express in our own way, and on our own terms, which is really awesome.

CMKY: Were you guys happy with the outcome of that project? We were thrilled, but just to know from your perspective.

CH: Yeah, the way we attacked that, and all these projects that we do with you is one where I actually step out and just let the team go. Teams were formed and then they all break out to concept, they pick the best ideas, and then they run with it. With The Rainbow Sandwich Projectile Experience, there were three different teams that divided the project into three different parts. The first part had this cool Pac Man throwing up a rainbow over the Fox Theater logo which then landed on this awesome 3D sandwich puppet show and finally ended with this trippy psychedelic projectile sequence.

All of this just driven by passion and a love for creating stuff. CMKY allows us break out and do exciting stuff like this. The team gets an opportunity to express their creativity in front of an audience that is very open to these types experiments and progressive digital art.

CMKY: Yeah, awesome! Can you describe a little bit about what’s being worked on for this year’s CMKY Festival, without releasing any secret information?

CH: Yeah, we’re doing two projects this year, more of installations that will be at different events within the program…one of them, is about disconnecting to connect and I’m going to leave it at that. The other one is really about having fun connecting with people, but then the output of that being an artistic expression or encounter that you can share with each other.You’ll just have to go to the event to see it and experience it.

CMKY: What’s next, what’s on the horizon for Mondo?

CH: As far as where we’re headed, it’s about doing innovative and doing creative work that we’re really passionate about. We’ve been extremely fortunate to get all of our work based on referrals. We have no new business person, no account manager, it’s all just word of mouth.  Moving forward we’re going to get more aggressive at going after really creative work that we’re really passionate about and want to do, and the clients we want to work with. So like those projects I talked about that we really like doing…To get there we’re in the process of re- designing our site, and really positioning ourselves and work front and center so the perception of who we are and what we do is a little more defined. We’re really on a mission to do more innovative and creative work that allows us to express our passion to create…Boulder is an awesome place for that, there is a lot of activity in this space with a lot of creativity and innovation happening every time you turn your head.

CMKY: Is that part of why you’re here, like why is Mondo based in Boulder?

CH: Yeah, well it all just happened that way. I was a Creative Director, ay DDB, which is a fairly big ad agency, and I was basically burned out on the big agency thing. I then came to Boulder and worked at a couple start ups until I felt the time was right to start Mondo Robot.

Something I’d always dreamed of doing was to create an agency that did kick ass work and had a kick ass culture to support it. It’s really just about building an environment where people can come here and express their passion and be creative. We have no intention of growing the agency huge, it’s more about working with a team of talented, creative people, on cool inspiring projects, at a place we all love to go to everyday.

CMKY: Cool, anything else you want to add?

CH: Just that we love working with CMKY and you guys, it’s a lot of fun, our goal is to hopefully establish some deeper relationships with some of the artists involved at CMKY as well and get into more experimental stuff.