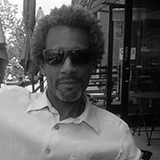 Michael jones has been selecting since hearing songs on the radio from the back seat of his mother’s T-Bird in late sixties Los Angeles, California.  His musical sensibilities were formed in Southern California, moving to Santa Cruz in 1996 to complete a sociology degree with an honors senior thesis entitled “Race Music: Commodity, Discourse and the Racialization of Hip Hop Culture.”  He has witnessed major technological transitions of music consumption from eight-track to cassette, cassette to cd, cd to digital audio file and the persistence of vinyl through it all.

He started DJing in 1998 at UC Santa Cruz KZSC 88.1 hosting the multi-genre music and word show “A Place at the Table” until moving to Boulder, Colorado in 2003 for an MFA in writing and poetics at Naropa University.  His music selection abilities have taken him to theaters, clubs, lounges, and various private events.  In each, whether on a barefoot dance floor with sage wafting through the air or a room where folks just wanna get free and sweaty to the beat, Michael has used such opportunities as nexus of his personal inner and shared outer world.

Michael is well-known in the Boulder music community as much for his selection ability and spoken word versatility as well as his propensity for being the first and last person on the dance floor (sometimes literally) at any given get down, eyes closed, getting intimate with the bass bins.