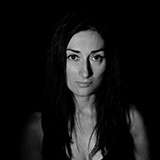 A self-confessed Noisician, Paula Temple arrived in 2013 with the monumental Colonized EP on R&S Records and the “Human Drama” remix for Planningtorock.

2014 brought Deathvox, the second awe-inspiring EP for R&S Records, alongside a new release for Noise Manifesto and remixes for The Knife, Perera Elsewhere and Knox on Boys Noize Records. Such refreshing high-voltage output is rapidly placing Paula Temple at the forefront of new techno.

The previously released track, “Speck of The Future,” appears on Jeff Mill’s Exhibitionist mix album and techno vanguard Chris McCormack’s Materials label; and in her early days, Paula Temple co-developed the innovative MXF8 live performance MIDI controller, one of the first of its kind. She later took the MXF8 out on the Mind And Machine tour for three years.