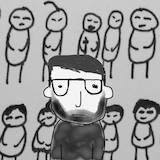 time for trees on soundcloud

Time for Trees (Joshua Smith) is a techno producing, label managing, festival co-creating, sound designing fellow who loves peace and quiet interrupted only by the rhythmic undulations of techno jamz in (a) space. Having lived a life tightly wrapped around techno since the age of 17, he has deep roots in Colorado’s beautiful, and unique, electronic music scene.

These memories and experiences inform all of his musical work, creating a distinctive palette of natural occurrences in sound rubbing up against hard lined techno robotism. As a DJ, he blends a personalized love of techno funk and soul, always finding the balance between the sexy and the playful. As a producer, he attempts to wrangle a plethora of influences; his musical diaspora spewing forth as big-sweatered techno melancholia, and psychedelic, pumping dance floor comedy acts. As a person, he is mostly pleasant. As one of the original members of Colorado’s Communikey crew, and one of the first directors of the CMKY Festival, Joshua learned that throwing festivals is very hard, and he does not like doing it. It is seriously a lot of work. So, as a result he started the Make Mistakes dance social, tennis club, and music label with several of his friends that had similar thoughts about the difficulty of large scale festival production. Out of that came a series of legendary Colorado techno events, with top-notch experiential art installations, and wide ranging and talented performers and DJs. He releases music on labels such as Archipel, Emote Music, Bleepsequence, and the Make Mistakes label, on his own and with his myriad and talented friends. On the day to day, he is a sound designer in the video game industry, working on titles such as LEGO Universe and The Elder Scrolls Online.